To share your memory on the wall of Samuel Glass, DVM, sign in using one of the following options:

Provide comfort for the family by sending flowers or planting a tree in memory of Samuel Glass, DVM

Provide comfort for the family by sending flowers or planting a tree in memory of Samuel Glass, DVM

To send flowers to the family or plant a tree in memory of Samuel Edward Glass, DVM, please visit our Heartfelt Sympathies Store.

Receive notifications about information and event scheduling for Samuel

We encourage you to share your most beloved memories of Samuel here, so that the family and other loved ones can always see it. You can upload cherished photographs, or share your favorite stories, and can even comment on those shared by others.

Posted Mar 23, 2020 at 12:33pm
Sally and Dale, our prayers and heartfelt thoughts are with you and your family. My memories of Uncle Sam are etched in my mind from long ago. They are of a loving family man that cared deeply about people. I know my Mom loved him deeply. One of my most fond memories is of our entire family having Sunday dinner at “Pop’s and Mumsies” house. What great family fellowship. Please accept our sincere condolences in this time.
Chris Kelley
Comment Share
Share via:
DB

Dr. Tom always spoke so highly of Dr. Sammie. In some ways, I believe he thought of him as the brother he never had. Our hearts are heavy as we so wanted to attend the services, but we were advised not to travel under the circumstances. Many, many thoughts and prayers go out from our family to yours - you were so blessed to have such a wonderful man for so many wonderful years!

Posted Mar 22, 2020 at 10:18pm
September 1973, I was truly blessed to meet Dr. "Sammie" Glass. Being a recent hire to operate the TVMDL in Center, TX., I was sent to Gonzales for several weeks of one-on-one training with Dr. Glass. From day one, a lasting friendship began, as we seemed to understand each other. When comparing our lives, we discovered many similarities - rural upbringing, vet school, working a year in Physiology and Pharmacology, cows, and so on. For the next twenty years or more of asking him countless questions/advice concerning diagnostics, etc., he always patiently gave answers, help, and advice. I always looked forward to various meetings with him - egg clinics, Poultry Federation, staff conferences, and AVMA. Here we could discuss our laboratory operations and life in general. God certainly had a hand in blessing me with Dr. Glass's friendship. I have lost my dear friend, and I will miss him so.

Posted Mar 22, 2020 at 01:16pm
He was a wonderful, caring man. He taught my sister Carolyn "the ropes" in the world of business. Sally I grieve with you for your loss. He will be missed.
Comment Share
Share via:
DB 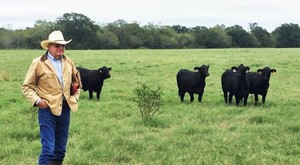