To share your memory on the wall of David Cole, sign in using one of the following options:

David was retired from serving in the U.S Air Force. In his later years, he spent most of his time outside. Whether it would be mowing his lawn, or sitting out on the back porch, David had a true love for the outdoors. He would also be described as a handy man, always looking for something to build or fix. David also enjoyed traveling with his wife and children.

David is survived by his wife, Dorothy Cole of Harwood, daughter and son-in-law, Susan & Steven Phinney of Moulton, and son and daughter-in-law, Roger & Priscilla Cole of Dripping Springs. He was preceded in death by his parents, and brothers, Harold Cole and Travis Cole.

Service for David Cole will be held at a later date. Friends may leave their condolences and sign the guestbook by visiting www.seydlerhillfuneralhome.com. Arrangements are under the care and direction of Seydler-Hill Funeral Home.
Read Less

To send flowers to the family or plant a tree in memory of David George Cole, please visit our Heartfelt Sympathies Store.

There are no events scheduled. You can still show your support by sending flowers directly to the family, or planting a memorial tree in memory of David George Cole.
Visit the Heartfelt Sympathies Store 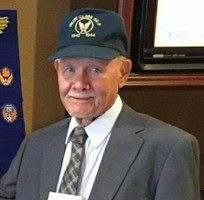