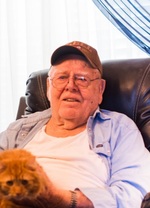 Wilbert was a character; he had a special wit about him that you could not help but love. He enjoyed being surrounded by his family, up until it was time to go to bed. He spent his time hunting, camping, and simply tinkering around, looking for something to get into. On his down time, he would be found in front of the television, watching an old western movie with his sidekick, Tigger.

A visitation will be held on Wednesday, October 7, 2020 from 5 until 7 p.m. in Seydler-Hill Funeral Home. A rosary will follow at 7 p.m. with Deacon Terry Brennan. Honorary pallbearers include his grandson: Derrick Klapuch, Devin Benes, and Ryan Benes. In lieu of flowers, memorials may be made to the: Alzheimer’s Foundation or the American Heart Association. Friends may sign the guestbook and leave their condolences to the family by visiting www.seydlerhillfuneralhome.com.

Due to current CDC, state, & local mandates, protective measures regarding social distancing, limited attendance capacity, and use of personal protective masks will be required for the visitation and rosary. Services are under the care and direction of Seydler-Hill Funeral Home.