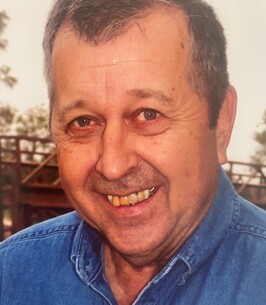 Robert Lee Janota, 76, entered Heaven on Easter Sunday, April 17, 2022. Robert was born in Gonzales County at Crews Hospital on Sept. 30, 1945, to Charlie Joe Janota and Albina Ella Stefka Janota. A lifelong Catholic, he was baptized at St. James Catholic Church in Gonzales, where he would receive his First Communion with Father Mathey in 1956 and his First Confirmation with Bishop Lucy in 1961. He grew up on a farm and was very involved in everything from picking cotton to milking cows and collecting eggs. He attended school in Gonzales, graduating from Gonzales High School in 1963, and joked with his kids that he had to walk uphill, both ways, in the snow, to get to school each day.
While in school, Robert developed a passion for music, and was excited to receive a scholarship to attend the Texas College of Arts and Industries (later renamed Texas A&I University) in Kingsville. He loved those college years, but he returned home in 1967 when his mother passed away. He intended to remain at Texas A&I University after earning his bachelor’s degrees in music, as he was even offered a graduate assistantship, but his dad asked him to come home to Gonzales and teach at the high school, since he had taken enough hours in music education. And because family was the most important thing to Robert, that’s what he did. Robert taught band at Gonzales High School from 1967-71, and then at Moulton High School from 1971-79. He also taught band at St. Paul High School in Shiner from 1972-1979.
Robert thoroughly enjoyed those bachelor years, and he had many friends from nights shooting pool at The Club and other local beer joints, playing music, attending dances, playing dominos and driving around. Many of the stories have been exaggerated or lost over the years, but good friends would recount, with a mischievous twinkle in their eye, what a character Robert was back in the day. It took two serious car wrecks and a good woman to finally tame him. And Robert fell for the love of his life while recuperating in the Shiner Hospital after that second wreck. Eight short months later, after a whirlwind courtship, Robert married Peggy Marie Valis on Aug. 5, 1978 (her 20th birthday), at SS. Cyril and Methodius Catholic Church in Shiner. They built a house and their lives together in “Kokernot Hill” between Gonzales and Shiner.
Robert took took a year off from teaching in 1979-80 to start his Farmers Insurance business, but when his former students threatened to quit band if he didn't come back, he returned to teaching at St. Paul again from 1980-82, while continuing his insurance career. He and Peggy also started a family, and Robert’s greatest joy was being a dad. They had three children and spent their weekends tending cattle at their property in Nickel, barbecuing, hanging out with friends and family in local beer joints, and fishing. Robert enjoyed treating the kids to ice cream, snacks for the drive home on Friday evenings, quarters for a jukebox and $5 for straight A’s on their report cards. The family attended church together, where Robert sang, led the choir, and actively participated as a member (and eventual 4th Degree Knight) of the Knights of Columbus Council 5090. The family also traveled often to nearby communities while Robert was a proud member of both the Shiner Hobo Band and the Round Top Brass Band. He loved his friends from The Bunch, his Czech genealogy and polka music. Robert played all instruments, but trombone and harmonica were his favorites. He loved entertaining a crowd, big or small, with music and jokes. And his laugh was so big, loud, often and unique that his kids would use the sound of his laugh to find him in a crowded room.
After retiring from Farmers Insurance in 2008, and seeing his children off to college, Robert also happily welcomed grandchildren. And he loved being a Papa! He could no longer let kiddos ride on his back or sit in his lap to drive a truck, but he entertained his beloved grandchildren with stories and more jokes. And he enjoyed his final years reminiscing with good friends from Gonzales, Moulton and Shiner, including his fellow members of the 621st Mess Kit Repair Club.
Robert is survived by his adoring family: wife Peggy of Shiner; daughters Jocelyn Sexton (and her husband Scott) of Dripping Springs, and Haley Boney (and her husband Matthew) of Pine Grove, Louisiana; son Nicholas (and his wife Alex) of Leander; brother Clarence (and his wife Mary Ann) of Sinton; sister-in-law Millie Janota; and numerous in-laws, nieces, nephews and cousins. He was preceded in death by his beloved grandparents, parents, brothers Charlie and Clifton Janota, and sisters-in-laws Pippen and Martha Janota. Robert’s immediate family will have a private funeral, with interment to follow in the St. James Catholic Cemetery in Gonzales. Friends may leave their condolences with the family by visiting www.seydlerhillfuneralhome.com. The family sends a special thank you to the staff at the Texan Nursing & Rehabilitation of Gonzales, as well as Dr. Sean Hattenbach and Dr. James Drost, for their care and compassion over the years.
Memorials may be made to the Knights of Columbus Scholarship Fund.