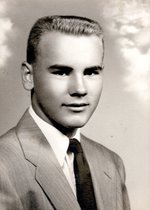 Keith Coover, of Harwood, passed away peacefully Thursday, April 23, 2020 in Seguin. He was born on Mother’s Day, May 12, 1935, in an old farmhouse south of Spencer, Iowa, to Adrian and Beatrice Arms Coover. He graduated from Gillett Grove High School, in Gillett Grove, Iowa in 1953 and enlisted in the Air Force in November of that year. In the Air Force, he was a crew member on a B-35 Aircraft. After his honorable discharge in 1957, Keith began his civil career with General Dynamics in Fort Worth. He was with them from1958-1973, when he hired on with Lockheed at the Johnson Spacecraft Center in Houston, Texas. Lockheed supplied systems operators on NASA’s Research Aircraft. Keith retired from Lockheed in 1998 and moved to Harwood. Keith was a model maker for Lockheed and made models of spacecrafts and other items that were used to secure funding for America’s space program. He was personally acquainted with several the astronauts.
Keith was a builder and pilot of model aircraft. He not only built for his own use but was sought out by others to build for them. Keith won many awards for his flying skills and for a number of years, hosted a Model Airplane Fly-In at his home in Harwood. Keith was a gifted wood craftsman and made several lovely pieced for his home, including a china cabinet, a roll-top desk, and a grandfather clock.
Keith married Shirley Kirk in 1977. They would have celebrated their 44th anniversary in June. He is survived by his wife Shirley, children, Natalie, Brett, and Bryan Keith (Mindy); 5 grandchildren, 3 great-grandchildren, and 2 sisters. Keith was preceded in death by his parents and one sister.
A private graveside service will be held Saturday, April 25, 2020 at 10:00 AM in the Harwood Cemetery with Rev. Todd Craven officiating. Honorary pallbearers include: Bryan Keith Coover, Reid Coover, Riley Coover, and Danny Pool. Those wishing to make donations in Keith’s memory may consider the Harwood Community Center, P.O. Box 80, Harwood, Texas 78632 or the Harwood Cemetery Association, P.O. Box 70, Harwood, Texas 78632. Friends may leave their condolences by visiting www.seydlerhillfuneralhome.com. Services are under the care and direction of Seydler-Hill Funeral Home, Gonzales.