To share your memory on the wall of John Basquez, sign in using one of the following options:

John was a cowboy from the top of his cowboy hat to the bottom of his cowboy boots. He loved to work cattle, hauling bulls and horseshoeing. Sometimes he would come home from cowboying, take a shower and then drive across Texas hauling more cattle. His travels also took him, Patricia and his boys to Kansas, Oklahoma, Louisiana, Alabama, and Florida. John loved being on the road as much as he loved being on his horse. And no matter how far his travels took him, John would inevitably meet up with someone he knew. Of course, that was because John knew everyone, and everyone knew John.

Being forced to retire did not slow John down. He loved fishing, camping and just being outdoors. John loved going to both the Houston and San Antonio Livestock shows and saw great stars in concert including Alabama, Brooks and Dunn, Blake Shelton, and George Strait. But he mostly enjoyed the time he spent with his grandkids. His favorite pastime, though, was talking - talking on the phone, talking to the neighbors and even talking to strangers. He had an opinion and he let everyone know it.

The only sadness John ever knew, was the loss of his beloved son, Jacob, on December 31, 2012. John lived with a broken heart, but his love for his sons ensured he did not live a broken life.

He was preceded in death by his mother, Viola, his son, Jacob, and his father-in-law, Hondo Magallanez.
A visitation will be held on Tuesday, October 27, 2020 from 5 until 7 PM in Seydler-Hill Funeral Home. A funeral service will take place on Wednesday, October 28, 2020 at 10 AM in Seydler-Hill Funeral Home with Rev.David Schautteet officiating. Interment will follow in the Waelder Cemetery. The family would also like to invite everyone to join them at the Waelder Community Center for refreshments following the burial rite.

In lieu of flowers, memorials may be made to a charity of one’s choice. Friends may leave their condolences to the family and sign the guest book by visiting www.seydlerhillfuneralhome.com.

Due to current CDC, State and local mandates, protective measures regarding social distancing, limited attendance capacity, and use of personal protective masks will be required for the visitation, funeral, and graveside service. Those remotely sympathetic of COVID – 19 are politely asked not to attend. Services are under the care and direction of Seydler-Hill Funeral Home.
Read Less

To send flowers to the family or plant a tree in memory of John Edward Basquez, please visit our Heartfelt Sympathies Store.

Receive notifications about information and event scheduling for John

We encourage you to share your most beloved memories of John here, so that the family and other loved ones can always see it. You can upload cherished photographs, or share your favorite stories, and can even comment on those shared by others.

Posted Oct 26, 2020 at 08:33pm
I knew John for many, many years. We worked together and partied together many times. We use to travel the highways hauling cattle. I even let him drive my old yellow Pete once just because he wanted too! I know he missed hauling. We talked about it more than once. There were also times we all went to dances and just had fun. He could always have a good time. He was a great cowboy, a great cow trucker and a super dancer! Man could he two-step! John will always be in my heart....I will always consider him as a true friend. John will be missed by many. My heart goes out to you Patricia and to the boys. He was one of a kind! 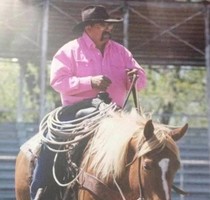