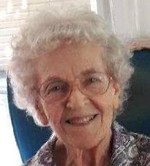 Frances Josephine Keck Bohlae was born in Gonzales County August 5, 1925 to John William & Grace Darling Carleton Keck. Because she suffered from chronic asthma as a child her formal education was only through the 5th grade. But due to her intelligence, her serious determination and her positive attitude she was never held back by a lack of schooling. At the age of 16 she moved to Houston where she lived at the Young Women’s Cooperative Home and began working for Southwestern Bell Telephone Company, first in the cafeteria then as the secretary to the building maintenance manager. It was at the phone company, while working as an elevator operator, that she met William George (Bill) Bohlae, who turned out to be the man of her dreams. They were married at the First Methodist Church in Gonzales on August 2, 1946. As soon as they married Frances “quit work to sit home and wait for babies to arrive”. As it turned out, it was a nine year wait before their only child, Alice Adele Bohlae was born. Frances stayed home but kept very busy learning cake decorating and oil painting. Later in life she began quilting, incorporating her amazing embroidery work into her quilts, one of which won a blue ribbon at the International Quilt Festival in Houston. She began making cloth dolls, which she dressed and always gave as gifts. She always took her doll in progress to work on if she had to wait anywhere, but her rule was not to take them in public until she had outfitted them with their undergarments. Frances was a gifted seamstress who made all of Alice’s and her own clothes and even lovely wedding dresses for more than one family member. When Alice was old enough to be a Girl Scout, Frances became one too. She led Alice’s troop for 10 years, even staying a year after Alice left the program. She acted as an organizer for Girl Scouts in the neighborhood and became trained as a canoe instructor. Under her leadership the troop visited several out-of-town destinations, always staying overnight with her relatives.

After Bill retired from the phone company, they traveled often. They spent every Summer in Estes Park, Colorado, often with grandchildren visiting, touring Rocky Mountain National Park and sometimes other nearby states. They took their grandchildren on many trips as well. Frances managed to see all fifty states, and four different continents, which included a trip to China with her sister Cecil.

Frances was a lifelong Methodist, starting at the First Methodist Church in Gonzales, then attending several Houston churches, until in the 1980s she found her church home at St. Stephens United Methodist Church. In addition to being her religious home, the church also served as her social outlet for many years. She spent time driving others to doctor’s appointments even in the medical center, visiting homebound friends and as a member of several senior groups, attending monthly meals and gatherings. In 2011 she was honored to be recognized as St. Stephens’ Outstanding Senior Member.

Although they had only one child of their own, Frances & Bill took in many others to live in their home. Countless Keck brothers, nieces and nephews and often even unrelated friends spent time living in the extra bedroom and being part of the family.

After Bill died in 1988 Frances lived alone in the house they bought in 1950. Then in 2013 she sold that home and moved to a house less than a mile away, on a piece of property where Alice also had her home. She lived alone in this house until late 2019 when her Granddaughter Tara, moved in to act as companion and caregiver. Along with Tara came her three small children that were the joy of Frances’s days. Daily she told us how much she was still enjoying life!

Frances was a loving and giving soul. She was never at a loss for words and talked to everyone. She will leave a large hole in our hearts but a smile on our faces.

Due to current CDC, State and local mandates, protective measures regarding social distancing, limited attendance capacity, and use of personal protective masks will be required for the visitation, church service and graveside burial rite. Those remotely symptomatic of COVID-19 are politely asked not to attend. Services are under the care and direction of Seydler-Hill Funeral Home.