To share your memory on the wall of Dustin Catchings, sign in using one of the following options:

Print
Dustin Lee Catchings was born on April 28, 1993, in Seguin, TX to Darrell and Tracy Catchings of Gonzales at a whooping 9lbs10oz. Dustin walked into the loving arms of his Lord and Savior, Jesus Christ, on June 21, 2020 at the age of 27.

... Read More
Dustin Lee Catchings was born on April 28, 1993, in Seguin, TX to Darrell and Tracy Catchings of Gonzales at a whooping 9lbs10oz. Dustin walked into the loving arms of his Lord and Savior, Jesus Christ, on June 21, 2020 at the age of 27.

From a young age, Dustin had the ability to light up a room. He had a heart that loved deeply and without qualms. He had a contagious laugh and a big personality to go with it.

Dustin graduated from Gonzales High School in 2011 where he was known by many as “Big Red” for his big size and bright red hair. He excelled in football and weightlifting. After high school, he became a truck driver in the oil field alongside his cousin, Jon, where they were always finding something to get into. After leaving the oil field, Dustin made his way back home to Gonzales to be closer to his family where he started a new career working for Tyson.

Dustin had a passion for Elvis which he shared with his grandma, so much so that he has a taking care of business tattoo on his calf. He loved all music and going out dancing. He often picked up projects from an old Bronco and a three-wheeler to a garden full of spicy peppers that he enjoyed turning into hot sauce and everything in between. He loved books and sharing his new favorite series with his sister. He loved his dog, Jake from State Farm, and couldn’t turn a blind eye from a stray. He enjoyed his late-night chats with his brother who was across the world and wanted nothing more than to have a beer with him when he returned home.

Dustin loved his family fiercely, especially his grandma, parents, nieces, and the list goes on. Basically, his heart was as huge as he was and there was room for everyone in it. Dustin will be greatly missed by everyone that knew him. He was the kind of person who didn’t know a stranger and would give you the shirt off his back. He had a huge smile that could always make you laugh and a listening ear to anyone in need.

Dustin is survived by his parents, Darrell and Tracy Catchings; sister, Ashlie Gottwald (Steven); and brother, Sgt. Dillon Catchings. He leaves behind his grandmother, Jo Nell Pick and nieces, Addilyn and Cassidy Gottwald. He also leaves behind countless aunts, uncles, cousins, and friends. Dustin is preceded in death by his grandparents, Lloyd and Elsie Catchings and Ronald Pick.

To send flowers to the family or plant a tree in memory of Dustin Lee Catchings, please visit our Heartfelt Sympathies Store.

Receive notifications about information and event scheduling for Dustin

We encourage you to share your most beloved memories of Dustin here, so that the family and other loved ones can always see it. You can upload cherished photographs, or share your favorite stories, and can even comment on those shared by others.

Posted Jun 28, 2020 at 10:04pm
Dear Catchings family,
We pray that amid this storm in your life that you may find peace and comfort. We are saddened and grieve with you.
Love,
Glenn, Sarah, Rachel and Mary Liz Menking
Comment Share
Share via:
HS

Posted Jun 27, 2020 at 05:51pm
Ashlie, We are so sorry for your loss. We are all thinking about you during this difficult time.

Posted Jun 27, 2020 at 04:50pm
Keeping you all in our warmest thoughts as you navigate this difficult time and wishing you hope and healing. 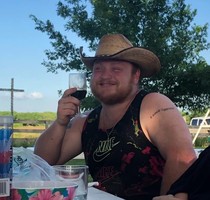