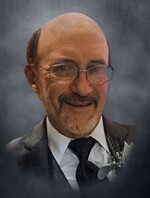 On March 4, 2022, Douglas Roy Kotzebue, 66, of Gonzales, slipped from the earthly confines
of this world into the glorious presence of God. After valiantly battling cancer for nearly seven
years, he died peacefully, surrounded by members of his family.

Doug was born in Houston, TX on February 2, 1956, to Alexander Andrew "Buddy" Kotzebue
and Elizabeth "Betty" (Zissa) Kotzebue. He graduated from Gonzales High School in 1974,
going on to earn his degree in Pharmacology from the University of Texas in 1978. Upon
graduation, he joined his father in the family business, Kotzebue Drug, where he worked until
his retirement in 2011.

In his youth, Doug excelled at a variety of sports. One of his most proud memories was
winning the State Basketball Championship with his teammates in 1974. He was an
accomplished water skier, amazing friends with his ability to ski barefoot. He was an avid follower
of all UT sports events, proudly wearing burnt orange to show his support. Of all the sports,
however, his true love was golf. If the weather was agreeable, most days you would find him at
the golf course with the golf buddies that he considered his extended family. He loved animals,
whether domestic or wild. He could sit for hours watching the deer that came up into his back
yard to eat the corn he had put out, marveling equally at the big bucks or newborn fawns. He had a
soft spot for the birds that landed at his feeders and the squirrels that stole from them. He loved
fish, whether at the end of a fishing pole, or in his numerous aquariums. He was a compassionate
man, braving the dangers and discomfort to help rescue victims of Hurricane Harvey in Houston, and
more than once giving odd jobs or food to someone who was down and out.