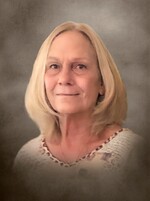 Bernadine (Deanie) Pamela Thoms Ploeger left this earth on Wednesday July 28, 2021 in Gonzales, Texas. She was born in Sinton, Texas on September 21, 1948 to Fred and Bernice (Turk) Thoms and was welcomed by brothers David and Dudley Thoms. Upon her mother’s death shortly thereafter, Deanie was raised by Walter and Merle (Turk) Schultz in Gonzales. Her cousins Ann Schultz Farek and Judy Schultz Ashe became sisters.


Deanie’s 50-50 partnership with Leslie F. Ploeger, Jr. was set in stone when they married on June 8,1965. Together they graduated from Southwest Texas State University on December 2, 1971.


A love of animals led Deanie from donkeys to thoroughbred horses. She hit the trails with the Alamo Palomino Association and the Texas Palomino Association of Fort Worth. She held several offices in those organizations and was president of the Palomino Horse Breeders of America. She earned three supreme championships during her time competing.


When daughter Lacey Bernadine Ploeger was born in 1980, Deanie embraced motherhood. After several long-term substitute teaching engagements, she launched her career at Gonzales High School. During her days as an educator, she taught all levels of English, Theatre Arts, Speech and Debate. As a seasoned competitor, her UIL teams were her forte. Over several summers her debaters traveled to camp in Oklahoma for that extra push to help them make it to State competition.


Sharing her love of travel, animals, and nature with granddaughter Paisley was a gift to Deanie. Track, volleyball, 4-H, piano, raising commercial heifers are just a few of the activities with Deanie as Paisley’s head cheerleader. Their bond will forever remain steadfast in Paisley’s heart.


The family will receive friends from 1 pm to 2 pm Tuesday, August 3, 2021, in the First Methodist Church. Funeral services will follow at 2 pm Tuesday in the First United Methodist Church with Dr. Matt Pennington officiating. Interment will follow in Ebenezer Cemetery. Pallbearers: Jeffree Thoms, Roberto Zuniga, Devin DeBoard, James DeBoard, Darby Byer, and Luis Muro. Honorary pallbearers: Bruce Gillihand, John Whitt, and Dr. Bruce McKee. Memorials may be made to the Gonzales First Methodist Church, St. Jude’s Children’s Hospital, or the American Cancer Society. Friends may leave their condolences to the family by visiting www.seydlerhillfuneralhome.com. Services are under the care and direction of Seydler-Hill Funeral Home.